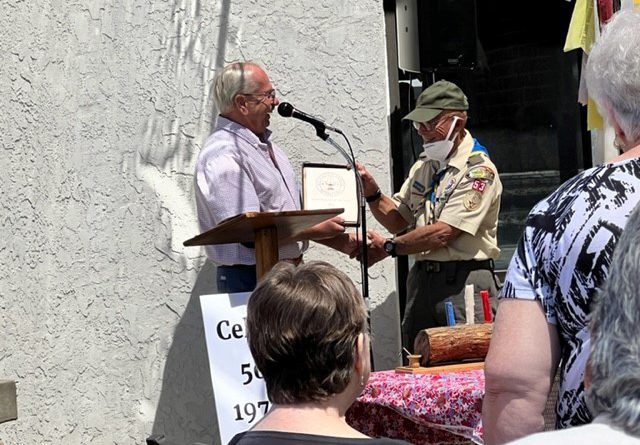 Congratulations to Scoutmaster Henry “Hank” Levien of Troop 53 for receiving the 2021 Chuck Smith Scoutmaster of the Year Award.  Hank has been Scoutmaster of Troop 53 for over 26 years, driving a scout-led program that has benefited hundreds of young men over the years.  His program has included many camping and high adventure experiences, community service projects, and youth leadership activities over his long tenure.  Over the years, Hank has camped with his troop and with Venture Crew 2053 over 540 nights, and has overseen the advancement of over 94 scouts to the rank of Eagle Scout.

Hank Levien served as a Navy officer for 30 years, achieving the rank of Captain and rising to become Commodore of U.S. Navy Amphibious Squadron Three.  After the Navy, Hank became Public Works Director at the City of Imperial Beach and has served there for 23 years.

While Hank was selected for the award in February, the presentation was moved to June 4 to align with the 50th anniversary celebration event for Troop 53.  Jim Atkins was on hand to make the presentation as representative of the San Diego-Imperial Council and the Eagle Scout Alumni Association. First Thursday of the month at 07:10 AM, at Atherton Hall, Camp Balboa.

All members welcome. Please send questions, comments, or ideas for the Board to consider to Zaida Holmes, (619)298-6121 ext 236, or Zaida.Holmes@scouting.org.